In the West, Valentine’s Day is celebrated on the 14th of February. On this day lovers show their affection by giving each other presents. Even though Valentine’s Day is also celebrated in China now, the original Valentine’s Day in China is celebrated according to the moon calendar on the seventh day of the seventh month. This feast originates from an old Chinese myth. It goes as follows: a fairy from the sky, Zhinu, once loved a normal human being on earth: Niulang. However, God did not allow a romance between a fairy and a normal human being and thus didn’t let them be together. The love between these two touched God’s heart. That is why he decided to let them be together on the seventh day of the seventh month according to the lunar calendar. This day gradually changed into a day on which lovers go on a date.

There are many different ways in which people celebrate Valentine’s Day in China. In some places they set up a wish tree so that everyone can write down their wish, hang it in the tree and pray it will come true. In some places people organise big sewing competitions for woman to see who is the most skilful with one’s hands. In other places people organise big cooking competitions to find out who has the best cooking skills. Besides celebrating Western Valentine’s Day in China, you can also celebrate Chinese Valentine’s Day.

Because of the fact that China and Japan are neighbours, Japanese people celebrate the Chinese version of Valentine besides the Western version. The interesting thing about Valentine’s Day in Japan is that if the man receives chocolate from a woman on the 14th of February, he is supposed to give a present in return on the 14th of March. Often, this present is more valuable. In Japan this is called ‘White Day’. Isn’t that interesting? 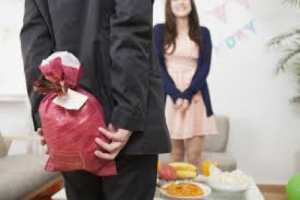